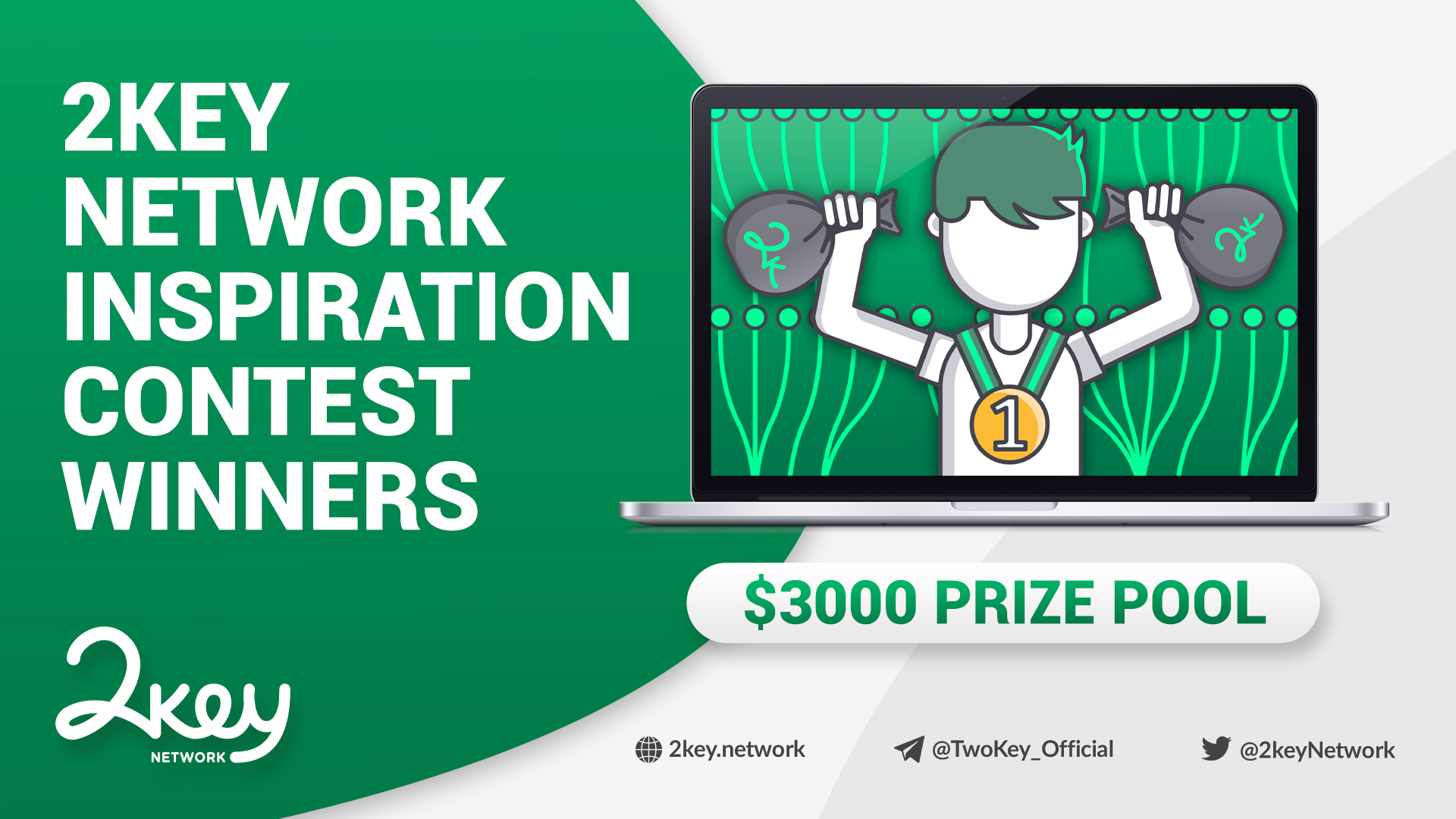 We had nearly 100 entries in the 2key Network Inspiration contest. I'm thrilled because this means 100 of you worked on creating a concise crowdsourcing campaign, something most marketers find difficult. But it can be done, right? I hope this was a helpful exercise for you.

Of course, it was very difficult narrowing down the entries. Don't feel bad if I didn't choose yours. There were quite a few outstanding ones in the mix, but I was only able to select one out of every five entries, so the odds were not so high.

Of course, picking the winners was an exercise in objectivity and subjectivity (Design & Creativity, for example). But note that the Campaigns I chose each presented an inspiring cause and a clear conflict. Occasionally they break the "formula" but still succeeded because of the way their masterful use of humor, pain, or intrigue to build interest in their campaign.

Thanks to everyone for participating, and again, I really hope this gave you the motivation to create a campaign for the business you always wanted to open or the charity you're dying to help out!

Here, with my brief comments, from last to first, are…

Here is a campaign featuring one of our latest launch partners, with short text, clean design and of course, a great cause.

This one is a great idea I didn't really expect, in this campaign 2key Token Sale (which is getting closer and closer the more you read here) is presented clearly, with screenshots from our Token page, all organized nicely, great job!

18. Code to inspire: donate for sustenance. - by @codetoinspireteach

This campaign presented our launch partner Code To Inspire in a short and concise message.

17. help us save the brown bear from the Pyrenees. - by @helpussavethebrownbearfromthepyrenees

The Pyrenean brown bear is endangered and this campaign is aiming to change that. We at 2key all love our planet and all the animals on it, and we truly hope our platform will help save a lot of endangered animals.

This is one of the best and funniest campaigns I've seen! This is why I gave it 5 points for creativity. The campaign goal is to figure out whether bitcoin reached it's peak or not - for this goal the contractor has a 3 step plan - Money, Looking for Green Candles, and Finding Answers. Well done!

15. Be a Pal, - Help Us Transfer an Animal. - Stranded Animals Near Taal Volcano - by @livethelife

Did I already say how much we love animals? Unfortunately Taal Volcano eruption caused a lot of havoc, so much in fact, that when people ran away they were leaving many animals behind. This campaign's goal was to help transferring those stranded animals so that they won't be left behind to die. Great cause, nice design, nice work!

14. Donate to Australian Wildlife and Nature Recovery Fund - by @australianwildlife

Back in January, Australia was burning down. The fires caused massive destruction, and by estimates 500,000-1,250,000 animals died, a huge number of lives lost and many damage was caused to property.

This campaign's goal was to crowdsource donations for the World Wide Fund For Nature Australia that will deliver Wildlife response, Habitat restoration, and Future proofing Australia.

You guys are so creative! I would have never thought of this idea.

This Campaign is designed to finance the first-ever Ethereum node launched outside the Earth surface. Collected funds will be offered to SpeceX to install an Ethereum node on one of the satellites and to be launched into Orbit.

For demonstration, check out this Starlink Ethereum satellite:

Social learning is the new digital learning, students learn with and from each other. Edu-Sense aims to implement smart classrooms and make sure today's children are fit to the digital age.

This is an example for a well designed campaign that reached it's goal. Great job!

This project aims to Secure the future of Wikipedia with donations. Every person used Wikipedia at least once. This landmark website completely changed the way we consume knowledge.

This campaign features Give Directly, which is leading the world’s largest and longest term experiment to date studying the effects of a Universal Basic Income.

With Electronic monitoring, they transfer the funds from end-to-end and help those in need. Great initiative, wonderful campaign!

Gotcha! is the Pokemon GO of coupons and advertising, with the app you can virtually travel the world and find coupons nearby, just like the popular game.

With an original idea, nice design and 221 views, Gotcha! reached the 9th place in our contest.

Africa is the poorest continent in the workd and 20% of it's population is chronically malnourished, this campaign aims to change that.

With the goal of donating 100,000 ETH (pretty ambitious 🙂) this campaign is nicely designed and presents the story very well.

The Novel Coronavirus has already killed >1000 people (according to official Chinese numbers) and has the potential to make the world's economy collapse as more & more people are in lock-down, and those who aren't locked are afraid to fly. This campaign looks to source donations to DAFACT, which provides First-Aid when disasters happen. Also raised funds will be used to spread awareness across the world and fund vaccine research.

6. Your Donation will bring RHAETIA, the first & oldest steam engine back to motion - by @rhaetia1

RHÆTIA is the first and oldest steam engine of Rhätische Bahn AG, a true Swiss landmark. RHÆTIA group is looking to source donations to create awareness and to assist technically with the restoration work of the train.

First Kudi is a debit card for the African market that allows you to buy and sell digital assets. However, there are shipping & production cpsts that are not sustainable by all the people around the world. This campaign's goal is for everyone to have a chance to use First Kudi.

When the volcano erupts, there's basically nothing you can do but run away. That's what tens of thousands of people did, leaving everything behind them - crops, houses and animals.

This campaign aims to source donations for buying equipment to treat the victims, for families and farmers that are highly affected by the eruptopm, and to the Rescue Response & Emergency.

Australia is a land of bush-fires but this season's bush-fire is not normal. This is the second (and better) campaign about the fires that reached our TOP 20 campaigns in the contest.

2. Take your place among the angels that give life to our children. - by @foundationforchildrenwithleukemia

This campaign really touched my heart. LÖSEV Foundation for Children with Leukemia was established in 1998. The organiztion has grown into a family, making every effort to provide educational, financial, psychological and health support to children and their families. On September 2000, LÖSEV opened the first hospital in Turkey for leukemic children. A school for children with leukemia has also been established, and much more!

LÖSEV is a non-profit NGO, mainly aiming to provide educational and emotional support, financial assistance and health services for children who have leukemia or chronic blood disorders, in order to help them cope with a life-threatening illness.

That is an example for an exceptional campaign in all the ways - storytelling, distribution, design, creativity - truly amazing work!

Our #1 choice in the contest is a campaign that only started on February 6th, just a few days before the contest ended.

Revolution aims to change the long bureaucracy that causes injustice in the courts. It comes from the feeling of pain and injustice, as sometimes we fill the court system doesn't make any sense. For example the Nirbhaya case that hasn't been settled until today, though the victim waas raped and died from her injuries after a few days. that was 7 years ago!

Revolution aims to decentralize law and justice for the everyday people, so that cases wouldn't drag for decades, no corruption can happen, and crime rate will go down.

This campaign reached the first place in 3 different categories - Chain length, Impressions and Amont of Ropsten ETH raised. All that in just a few days - proves that anyone can do it!

Well done, You're the winner!

MOST IMPORTANTLY - YOUR PRIZES

If you found yourself among the TOP 20 campaigns, congratulations!

In order to claim your prize, please update your campaign page’s email as can be found here:

Edit your page email in the page's settings and make sure you can reach that mailbox.

We will email personally, based on your position in the contest, on how to proceed with receiving your prize.

Now the the contest is behind us, the games ended and it's time for the real thing!

2key Network is live on mainnet and you can earn REAL DAI for sharing 2key smart links!

Below are a few of our running live campaigns. The following Smart Links are the contractor's links, meaning that you get to start your own chain and earn huge rewards for your word of mouth!

The best time to start is yesterday - try it now!

Below are some of our live campaigns - click to enter any of them:

Your friends at 2key