Unlike what happens when sharing Web 2.0 URLs, sharing a 2key SmartLink connects the browsers the SmartLink passes through, creating an ad-hoc blockchain multi-party state-network composed of multiple participants - the HTTP clients (web browsers) which touched the link.

SmartLinks contain a cryptographically proven assertion of both the code for turning a browser into a node in the 2key shard running the contract (aka the "code hash"), as well as the dynamically changing state of this contract (aka the "state hash") - allowing each browser to sign it into the correct place in the state machine of the referral graph and the underlying smart contract.

The uniqueness of the 2key protocol is that it does not require any server to run. The state of the referral graph - which determines the economic distribution of reputation and monetary capital within the campaign - is managed solely by the cryptography and signatures handed down from browser to browser as these links are shared. This results in a fully scalable layer2 solution (as it does not depend on any server to run), which is also fully secure (as it only relies on cryptography to manage states). The contract's interim state is also echoed to a POA plasma side chain for logging purposes mainly, where the finality states of the contracts are periodically persisted to the Ethereum POW layer1.

A SmartLink URL contains two hashes, a code hash, and a state hash:

The code hash tells the browser where to find and load the Javascript and typescript from decentralized storage (IPFS at this point, FileCoin when it matures), ascertaining that all the browsers in the network are running the exact same version of the code for any single campaign - as these browsers must form an effective blockchain shard for managing the state per contract/campaign.
The code hash validates that each participant in a given campaign is running the same peer code, safeguarding the contract's integrity while it runs off-chain.

The state hash portrays, and allows to validate, the place in the referral graph state machine that each browser should be signed into to run the campaign. The browser utilizes the cryptographic code, downloaded per the code hash, to validate that the state hash as a valid specific point on the state machine of the contract (e.g., exactly where in the referral graph this browser is.) It then generates a new hash where the user can interplay with the contract, thus furthering the state and allowing that participant to invite others after them in the graph).
The combination of this ability and human link sharing allows the state machine of this contract to evolve.

With 2key's solution, opening a crypto wallet can be delayed until funds need to be pushed in or pulled out of contracts. For all other transactions, it's possible to interact with smart contracts without a user-managed wallet. This has significance for UX and adoption because the process of opening a wallet is long and could drive away users, especially when taken together with regular onboarding funnel of login or signup

Admits only verified users to participate in the contracts

Contrary to L1 blockchains, 2key network only connects between people. Verification of user identity and humanity is set as a pre-condition for registering into the network and participating in contracts

No overhead of resources for running the contracts are necessary because regular web browsers act as nodes in the network, utilizing novel cryptographics for verifying and generating transactions in the contract. For this same reason, 2key's MPSN Smart Contracts as a Service is both highly scalable and secure, as opposed to running all of a contract's transactions on a decentralized L1 chain, which will raise scaling issues, or using a centralized network to manage state, which results in security issues

2key links enable anyone to enter into a smart contract simply by receiving a 2key link from another participant in the contract. This makes interaction with smart contracts a simple "press and play" process, requiring zero prior knowledge or domain knowledge

Cheaper than running everything on L1.

Eliminates the need for ETH in running contracts

2key MPSNs maintain most transactions in the contract in a strict p2p off-chain manner between participating browsers. For the txs that must be sent to L1 (usually at contract start and conversion), 2key protocol employs novel meta-transaction approaches where decentralization is kept by having users cryptographically signing txs on the client-side while relaying the txs to the 2key backend, which then funds the txs with ETH, and relays them forward to the L1 (EVM - Ethereum Virtual Machine). This means that users of 2key don't need to have ETH in order to create, interact, and utilize smart contracts
2key holds global PCT patents for the technologies used in these processes. The reasoning behind patenting these technologies is to preserve the integrity of 2key tokenomy. 2key Lab's current patents, already deployed in 2key Network, include the following technologies:

DECENTRALIZED NETWORK FOR MULTI-STEP REFERRAL AND ACQUISITION TRACKING [US Patent Docket No. 09712.001PV1]

The base protocol layer for referral and conversion tracking utilizing cryptographic signatures on browsers.

DYNAMIC INCENTIVE MODEL FOR REFERRAL AND ACQUISITION TRACKING IN DECENTRALIZED NETWORKS [US Patent Docket No. 09712.003PV1]

This is an improvement to the 2key protocol enabling the use of GBLS and Schnorr signatures, among other methodologies, to make 2key links shorter while carrying more complex stateful capacity. 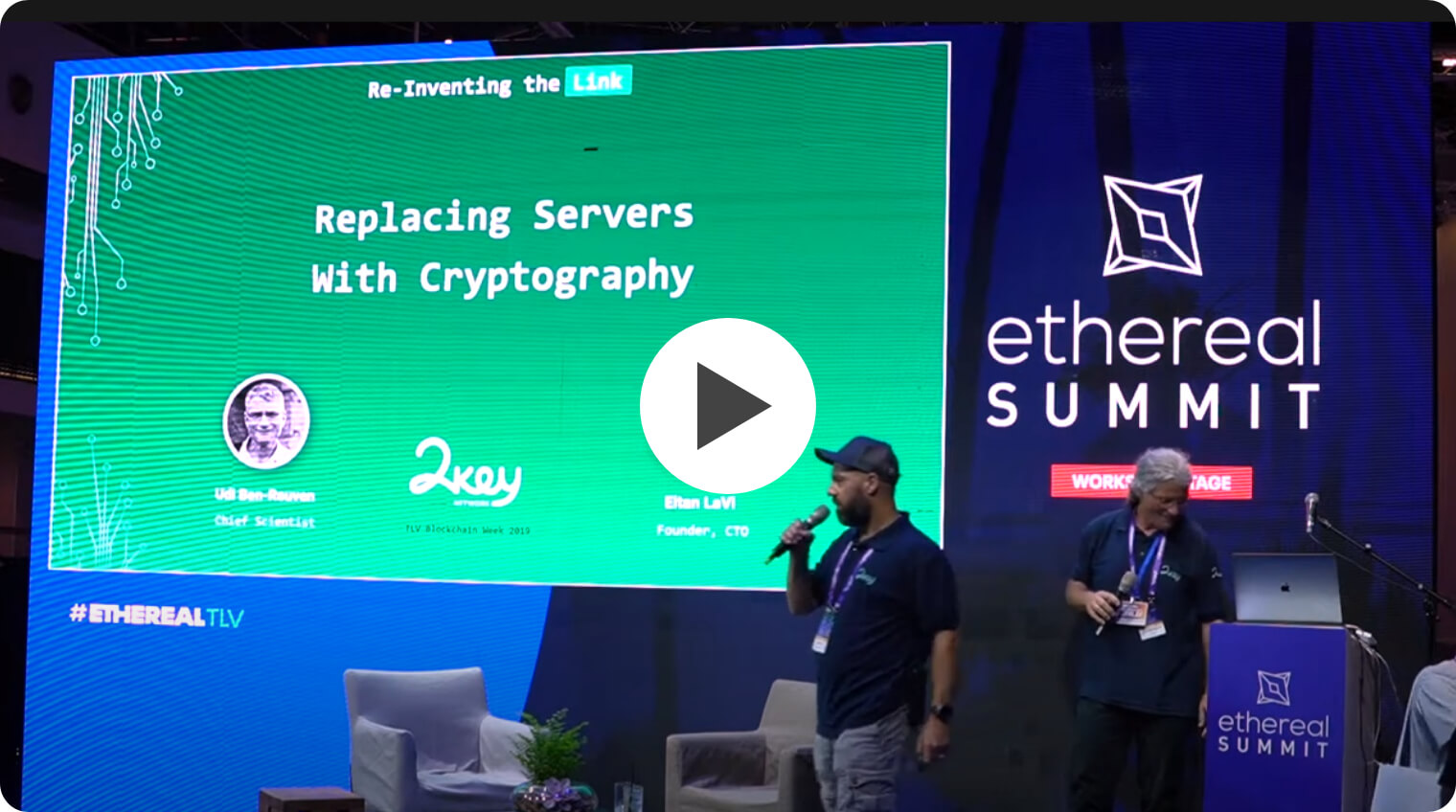 Currently, the lab focuses on developing a general-purpose Layer 2 (L2) solution for running any smart contract on browser-based Multi-Party-State-Networks (MPSNs). The solution is the lab's main goal for 2020 and includes several pillars.
‍
Developing a solution for deploying and interacting with smart contracts through browsers in a scalable and accessible manner is a challenging feat. Any solution designed for this purpose will require the following essential characteristics to be effective:

Enable to utilize zero-knowledge methodologies to efficiently persist transaction state graphs with up to hundreds of millions of transactions into the Layer 1 (L1) main chain (e.g., persist a contract with a massive number of votes into the main chain) with just one L1 transaction that can be validated in milliseconds

• Touch L1 mainchain only upon contract creation and resolution

Allow buffered off-line persistence into L1 in case all the state graph has to be publicly saved.
Allow a single quickly validated L1 transaction to save the final valid state of the MPSN.

All transactions in the contract except the creation of the contract and final persistence into L1 should be facilitated solely by p2p direct communication between browsers or their human users participating in the MPSN. This means zero reliance on centralized infrastructure for maintaining interim consensus in the MPSN while it is being run off-chain.

The model is designed to make sure that collaborators are rewarded, and spammers are punished.

There are 2 kinds of rewards for referrers:

• Reputation Points distributed to all users, and converted into 2KEY tokens according to the Reputation Mining formula.

In this model, the link creator chose one of several options, pre-setting the distribution of rewards between users in the referral chain. The model chosen by the contractor will then be embedded into the campaign smart contract. The options are:

Equal distribution among all participants in the chain

Equal distribution among all participants, except the last one who receives 3 times the rest

Campaign Doesn't Reward for Sharing. Incentivize people to share for the good of the cause and gamification in it 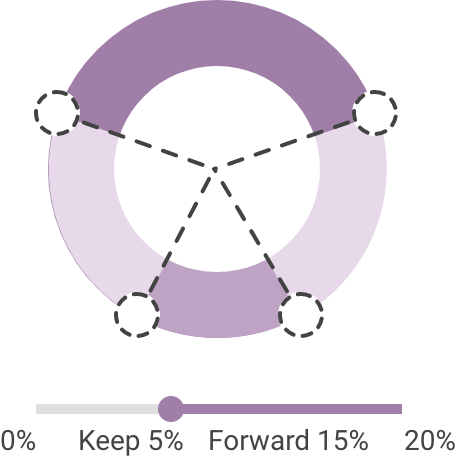 Choosing this model will allow each participant in the campaign to decide how much of the reward they wish to keep for themselves, and how much they choose to pass on to others who may help them achieve results. Inherently, participants will need collaboration to achieve their goals. So they’ll have to wager with the amount they choose to keep to themselves. That’s why we’ve developed a humorous UI for this model, which graphically illustrates to participants a cardinal rule: the more you choose to keep for yourself, the lower the chances that you'll achieve results. We’re already curious to get some insights into game-theory from this fun model!

This model takes into account dozens of parameters such as: The position in the referral chain, relative result delivery-time, a referrer’s past references in this domain and, most importantly - each participant’s calculated ‘reputation score’. The reputation score is dynamic, reflecting the productivity and relevance of each participant’s link-sharing activity over time.

With the new vertical web2 conversions, 2key will start exposing part of the APIs to allow any website or app to utilize the 2key protocol to drive any type of conversions on their app/site. Launch is expected during 2021.

As part of 2key roadmap, we plan on liberating the protocol from 2key.io's UI and are starting to enable its embedding throughout the web. For these reasons, we are currently building sub-SDKs and sub-apps, which can be embedded into other websites.

The first of these is the 2key embeddable "Refer & Earn" button, already integrated into various websites online.
The next step is to make the embeddable button more robust and able to run the entire Refer and Earn process as well as the PPC Review process, in an independent context entirely embeddable anywhere.
Further, we are working to also encapsulate and liberate a sub-app for only generating SmartLinks so that this too can be embedded anywhere online.

Eventually making it as easy as possible to create, refer and earn on SmartLinks will ensure the long-term success of the 2key.network and the 2KEY token economy.

The underlying asset of the 2KEY token economy is social capital - what is called Qi points on 2key.network. These Qi points can be earned by faithfully participating in the network and producing results. These Qi points will be also qualified for mining the 2KEY governance token when the DAO governance system goes live.

During the first few years of the protocol and economy, the 2key team maintains an internal congress DAO contract that governs the 2key.network smart-contract architecture. Once the new participant governance system kicks in, this contract will be open to petitions and eventually even votes from new community congress contracts representing the network's various participants.

Jump into the Docs

Want to learn more about 2key's work and future plans?
Much more detailed information and knowledge can be found in 2key documents: