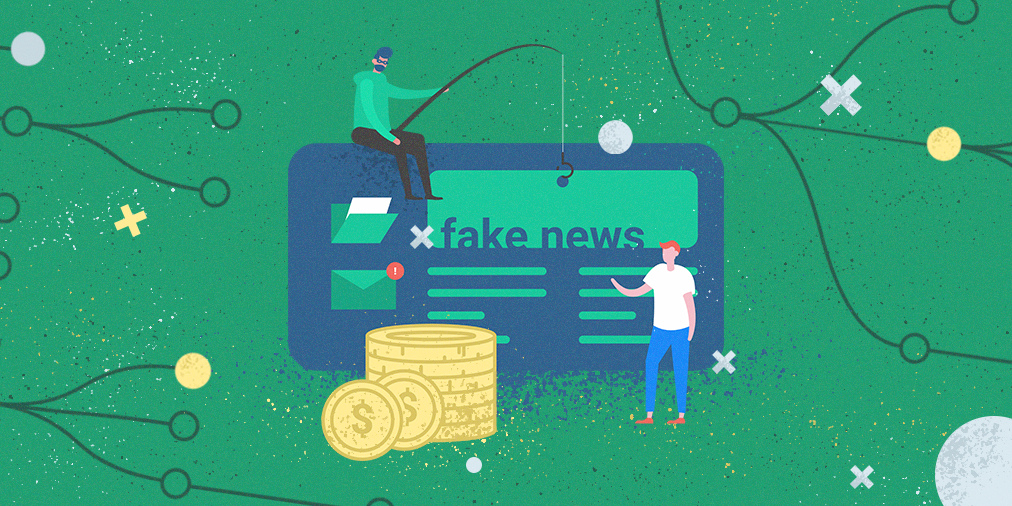 Why and How do people spread fake news?

There are various reasons to create fake news, but all revolve around the same underlying logic — amassing a large audience rapidly and leveraging that audience to achieve a goal.

When the goal is pushing out some product to earn money, fake news such as the discovery of a mermaid on a beach typically peters out rapidly. The initial traffic boost is short-lived as people quickly recognize the content for the click-bait it is and stop sharing it. Then the fake news creator needs to come up with another outlandish claim to restart traffic. So, aside from a mild annoyance at having been tricked into investing time checking such garbage, minimal damage is done.

On the other hand, ideological fake news is typically better constructed. It thrives by leveraging tools such as doctored images, dubious statistics, mere coincidences, illogical conclusions, and other dubious means to blur the line that separates fiction from reality.

That is for the content itself. If the only damage from fake news generators were based exclusively on their actual content, there would be no problem with fake news, as only a minute minority would ever emerge from the remote recesses of the Internet.

To become viral, fake news not only needs to be well crafted but also requires an initial artificial boost.
With content discovery on social platforms heavily manipulated by algorithms pushing content that they identify as popular, fake news generators have a field day to rig the game.

Fake news clusters also benefit from cross-contagion effects as social media platform algorithms estimate that your interest in one fake news topic is predictive of your potential interest in another set of fake news on a different topic.

In most cases, fake news generators get away with it. Even if some particularly grievous fake news gets banned, the majority take on a life of their own and actively erode public trust in factual truth, the basis of fruitful human communication.

Fake news generators benefit from the technological difficulty in identifying the fake news source, from all the social traffic and “recognition” amplifiers, real or bots, and from the relatively low cost of creating a network of bots and fake users that give fake news their initial push.

How is 2key Immune to Fake News?

2key SmartLinks automatically rewards people for sharing links. When a SmartLink is opened, all the people in the referral chain receive a fraction of the reward. The entire process is fully automated, barely more complex than shortening a link with bit.ly but with capabilities inaccessible without the combination of blockchain technology and 2key protocol.

There are many elements built-in the technology behind 2key SmartLinks that would prevent the spread of fake news:

Additional features on 2key’s roadmap will deepen its immunity to fake news:

Fake news mushroomed on a bed of hyper-centralization of social media platforms that benefited from the lack of control and regulations to amass user personal and behavioral data under the cloak of near-total secrecy. They then used the collected data to develop algorithms aiming at keeping users visiting their products as often and for as long as possible and translated that on-line time into gigantic profits.

2key was created to address and provide an alternative to this structural issue. In the process of gradually implementing full decentralization, 2key offers complete transparency, minimal and fully disclosed data collection, and rely on the tried and tested human mouth-to-hear technology, though in a keyboard-to-screen form adapted to digital communication 😀

Current social media platforms’ shares are concentrated in a few hands typically driven by greed, and keen to monetize the platform users for the stakeholders’ enrichment at the expense of the user — to the point of turning social media into a recognized behavioral addiction — and of society as a whole, if need be.

In stark contrast, 2key network stakeholders are anyone owning 2KEY tokens. Creating or sharing a SmartLink automatically generates Qi points yielding 2KEY tokens. It means that every 2key network user is a stakeholder. In addition, 90% of the network’s revenue is redistributed to users proportionally to their activity on the sponsored links. In short, any SmartLink creator or referrer automatically becomes a stakeholder.

Instead of luring people to spend ever-larger chunks of time consuming ads and reward them with valueless “likes” as is typically done on profit-driven social media networks, 2key networks encourage users to consider their SmartLink recipients’ interest before sharing it with them and reward considerate sharing and quality content with monetary value.

2key network uses technology to allow actual humans to filter content’s quality instead of using technology to lure humans into believing artificially or fraudulently bloated content validation. Whereas on current social media platforms, fake news generators gain fame, power, or money from their activity, on 2key network, they risk torpedoing their reputation and lose Qi points, or even be banned from publishing or sharing content.