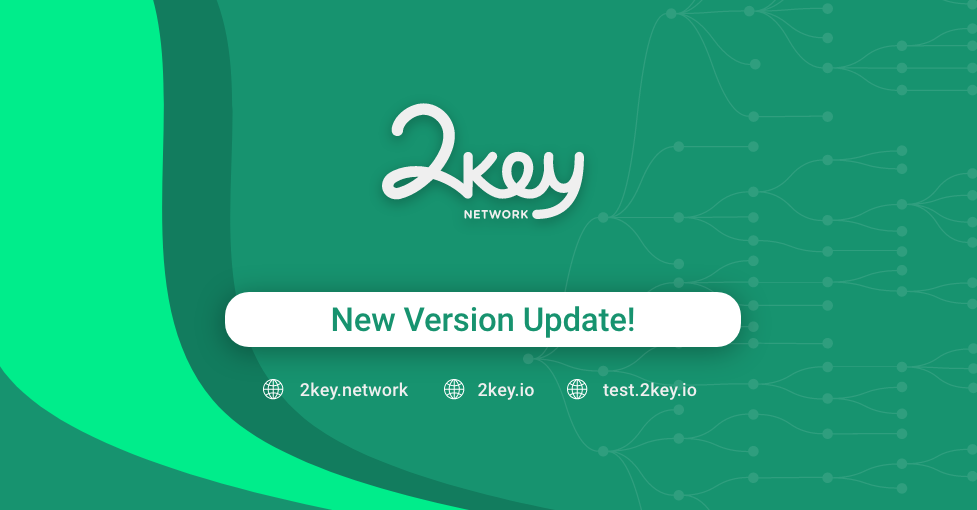 We are happy to update on a new major version release for 2key.network.

2key v0.5 is now live at 2key.io with quite a few improvements.

Check out the main updates:

2. New design and UX for Login/SignUp.
If you already have an account, you’re in the green :-), otherwise, enjoy the streamlined signing up process with direct funnels to creating campaigns.

3. Faster & easier onboarding for SmartLink creation
You can now create a page and wallet in just 2 clicks, also available within direct funnels to create campaigns.

4. Elimination of users’ Layer 1 registration fee
Registration for referrers in SmartLink campaigns is now taking place on the 2key Layer2 Protocol, eliminating Ethereum Tx fees. Layer 2 registrations then transmitted  to layer1 only when the user graduates to a higher risk account (e.g. contractor or converter in monetary campaign).

5. Kyber Katalyst migration + in-wallet swap optimizations
We merged Kyber latest upgrade — Katalyst, in the 2key wallet swap feature and optimised the swap mechanics to use mask-in hints to select only the top performing single reserves for any swap, making kyber swaps on 2key the cheapest possible in terms of transaction fees.

6. Option to postpone backing up your wallet — Create a 2key wallet in 2 clicks, and back it up later when it’s convenient.

7. Additional security layer to 2key wallet
Any activity that requires interaction with the wallet is now protected by an additional unlock request.

8. Improved data and accounting in SmartLinks’ dashboard
You can now see:

9. A new editor
Improved text and design editor for Hosted SmartLinks. You can now use SmartLinks for publishing your own professional blog directly on 2key.io

10. Enhanced validation for PPC Clicks
Better validation, and anti-fraud integration behind the scenes.

12. Various security patches and fixes to issues from our bug bounty program.