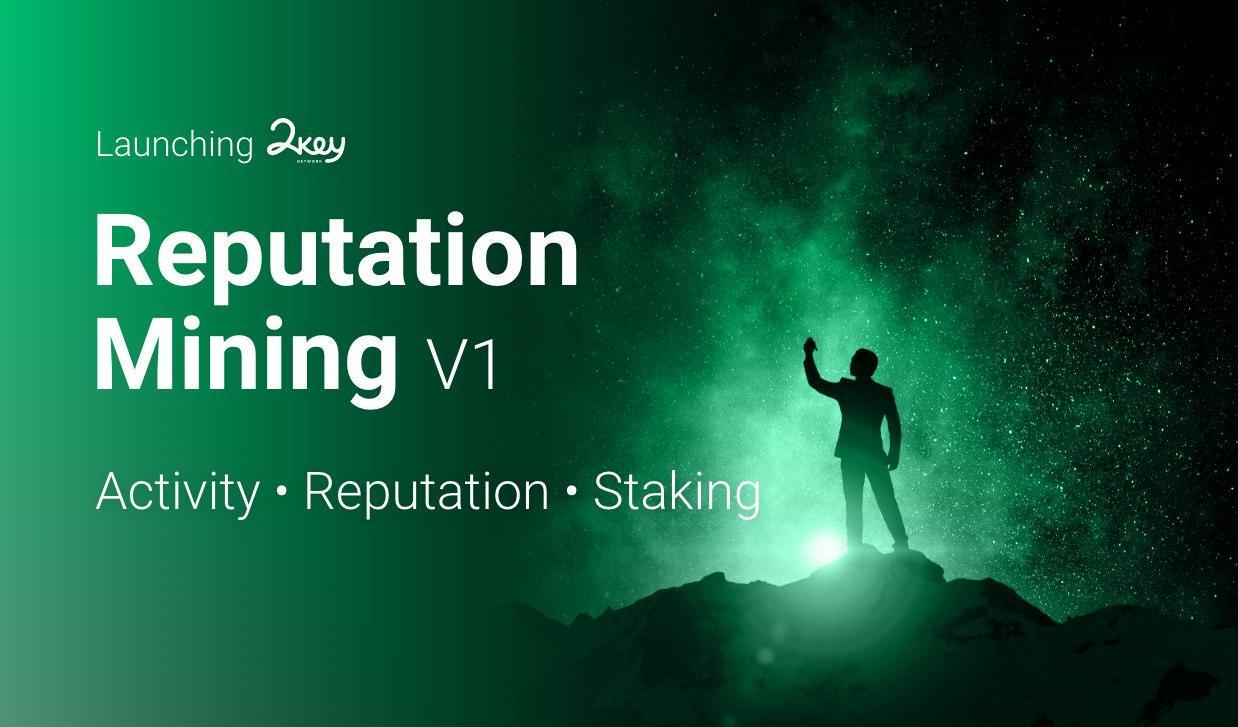 2key network is building a token economy based on reputation-social capital as the underlying asset. Your actions matter and are an integral part of continuously building your reputation and the 2KEY token economy.

Reputation score is counted in points based on your recent and lifetime activity. Every epoch, these points translate into 2KEY tokens distributed to all network participants proportionately to their Activity Score, Global Reputation Score, and Staking Score.

An integral part of the revolution 2key plans to create in the information distribution and online advertising fields is creating an accurate incentive system that transparently rewards actions yielding positive value, and penalizes counterproductive actions.

Today we launch 2key’s reputation system V1; below, you will find a detailed explanation of the reputation scoring method as it will work from the start of August 2020 (with the release of 2key v0.5).

How does it work?

(Future versions will have more layers: User‘s contribution to the growth of the network, token burn mechanism, token freeze mechanism and more).

The amount of 2KEY tokens distributed monthly to individual users is calculated by combining these three layers.
In this article, you will find a detailed explanation of V1 of 2key’s reputation system, its scoring method, and its financing structure.

From August 1st, 2020, up to 10% of this amount will be distributed yearly, with a monthly budget fluctuating proportionally to the activity on the network.

During the launch period, 2key caps the number of tokens distributed according to the following method:

Once the network reaches 100,000 monthly active users for at least three months in a row, the distribution around 1,000,000 2KEY tokens a month, with adjustments within the year as needed.

How to Earn Reputation Points 💹

Now that you know what funds the reputation rewards, it is time to look at how you can grow your reputation and earn them.

As a newcomer to 2key, you receive 5 reputation points. From that moment on, every action you take on 2key network enables you to earn or lose points. Your reputation score reflects the quality of these actions.

There are three ways to earn (or lose) reputation point on 2key:

Earnings Reputation as a Referrer
By sharing SmartLinks. The people who receive a SmartLink from you can:

Each time you refer a 2key campaign and your referral leads to a conversion down the line, you either EARN OR LOSE reputation points. Conversions can be approved or unapproved (if identified as fraudulent or if the converter is outside the targeted audience when the contractor has defined a target audience).

Earning Reputation as a Contractor
Once you publish a SmartLink and share it, the results achieved, and the feedback given by those interacting with your SmartLink will earn or lose your page points as follows:

Please note that contractors’ reputation points are applied to the page issuing the SmartLink, not to the personal user account. A page admin different from the page owner managing multiple pages is responsible for as many reputation scores as there are pages in addition to his/her separate personal reputation score. However, as a page owner, if your page receives feedback on your campaigns, it will also affect your personal score.

There are currently two main types of campaigns:

The points earned or lost vary according to your status and the type of campaign.

As a 2key user, you can have more than one status, but every action you take is linked with only one of these statuses:

It is important to keep in mind that reputation points are earned or lost, but never bought. Whether you are a user or a contractor, your reputation is entirely in your hands.

In addition to the reputation points described above, that are recorded on-chain, distributed automatically, and immutable, 2key offers users the option to give manual feedback.
Each 2key SmartLink offers the option to give feedback on its content or the referrer. When you receive a SmartLink, pressing these three dots opens the feedback interface.

Users’ feedback helps the network remain informative, respectful, and socially secure. Feedback can earn or lose points for the referrer or the contractor, depending on the type of feedback entered.

Feedback points are added or deducted manually and counted as follows:

The feedback mechanism is a trusted system via our app, and is not validated on-chain, nor is it result-driven per se. For this reason, we may incorporate after-the-fact analysis to prevent fraudulent feedback from negatively affecting users.

2key is a token-based economy and we encourage its users and token holders to help build and strengthen its tokenomics by actively staking tokens for the long term. Staking is counted as the lowest amount of 2KEY you actively staked for the highest number of days during the previous epoch, in a wallet connected to your user or page 2key.io account, or on Uniswap pools, and is part of the epoch mining earnings.

2KEY Tokens staked on Uniswap and SushiSwap qualify for the staking pool, meaning your earnings are double, once from the Liquidity Pool fees, and once from the Reputation Mining Staking Pool

Note- Tokens must be held in a 2key.io connected wallet (2key wallet, Metamask, Ledger, Trust wallet via WalletConnect, and soon more). Tokens held outside a connected wallet (exchange, unaffiliated liquidity pool, or another wallet) cannot be counted as staked tokens.

2key network’s users and pages earnings are made available for withdrawal from your Network Dashboard at the end of each epoch. Note: the withdrawal Tx fees are paid for by the user so it is recommended to check the Tx fee amount before withdrawing.

Pages and users can earn from each of these three pools. Each participant’s score is calculated based on the following scores:

(The numbers and dates and epoch duration below are for demonstration purposes only.)

If on September 1st, the Reputation Mining Pool calculated for August contains 100K 2KEY tokens, it will be divided between the three sub-pools as follows:

Build Up Your 2key Reputation Score! 🏆

We will update the Reputation Mining model as the system is modified but we encourage you to get well versed in this first version, it’s going live, and it’s your way to earn 2KEY at the network level. EVEN ON SMARTLINK CAMPAIGNS WITH NO REWARDS — you still earn reputation, which can earn you 2KEY tokens!

[Updated Oct 2020] Epoch duration might vary. We do our best to update this post to reflect changes in the epoch duration, but we advise you to always check from your My Activity dashboard.
We will announce additional reputation mining mechanisms as we progress.